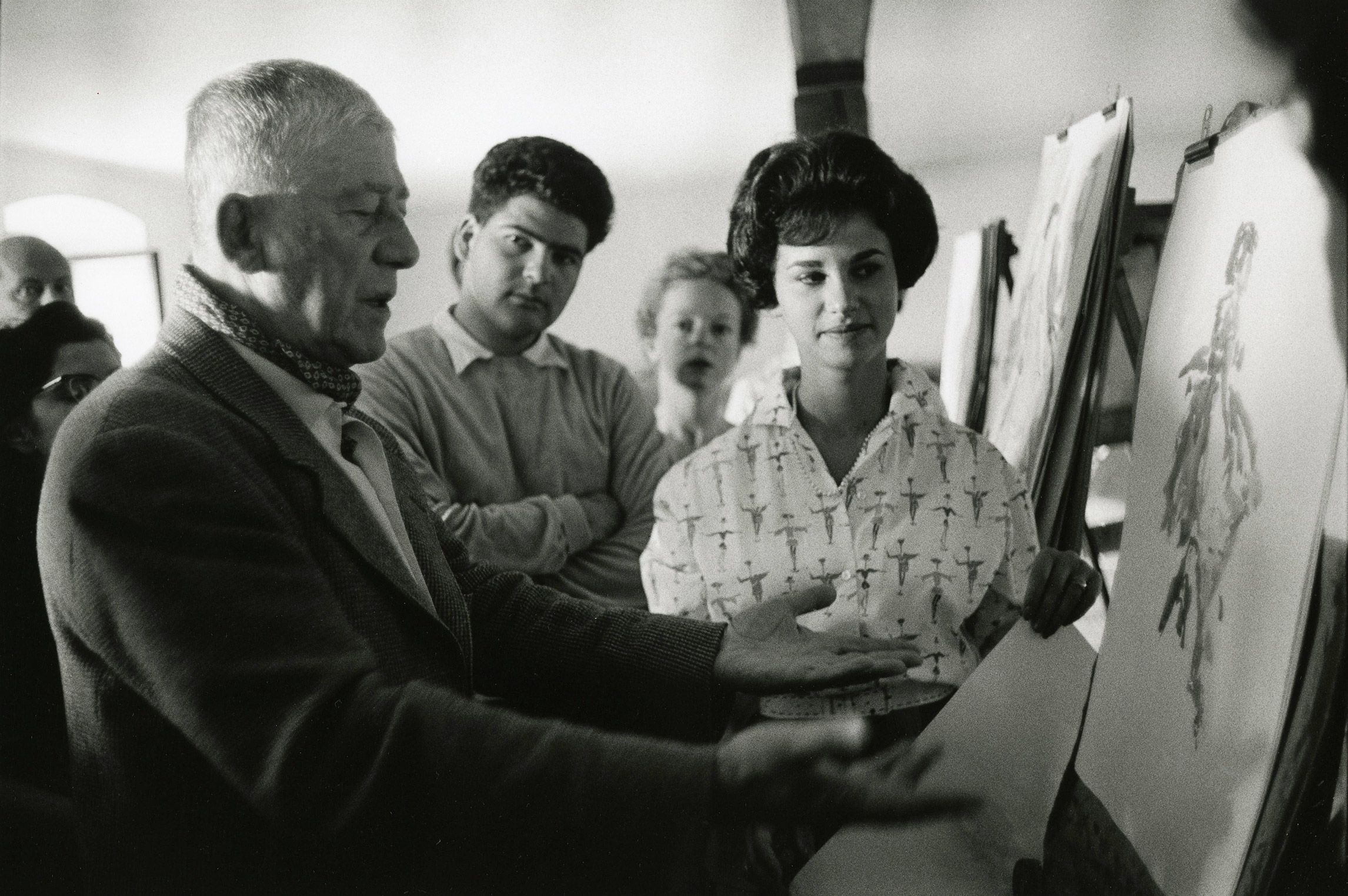 Oskar Kokoschka is born on 1 March 1886 in Pöchlarn (Lower Austria) on the banks of the Danube. He is the second child of Gustav Kokoschka, a travelling salesman descended from a family of goldsmiths in Prague, and Maria Romana, née Loidl, the daughter of a forester from the Alpine foothills of Styria. Oskar’s childhood is spent in Vienna.

In 1904 he enrols in the Kunstgewerbeschule (School of Arts and Crafts) in Vienna. His first oil paintings date from 1905/06. While still a student, he is commissioned by the Wiener Werkstätte to design some postcards. Employing a decorative style from which he will later distance himself, Kokoschka depicts motifs with flat areas of vibrant, contrasting colour. At the same time, he writes a number of prose poems, dramas and plays. Die träumenden Knaben (‘The Dreaming Boys’), published in 1908, immediately attracts the attention of his peers and is a stylistic milestone in the emergence of Expressionism.

Kokoschka quickly becomes a figure in Vienna’s cultural scene, setting himself up as an enfant terrible, and takes part in the major modernist exhibitions organized by Gustav Klimt and Josef Hoffmann (Vienna, Kunstschau [‘Art Show’], 1908 and 1909). 1909 also sees the first performance of his drama Mörder, Hoffnung der Frauen (‘Murderer, the Hope of Women’), whose impassioned and powerfully expressive style scandalizes audiences. 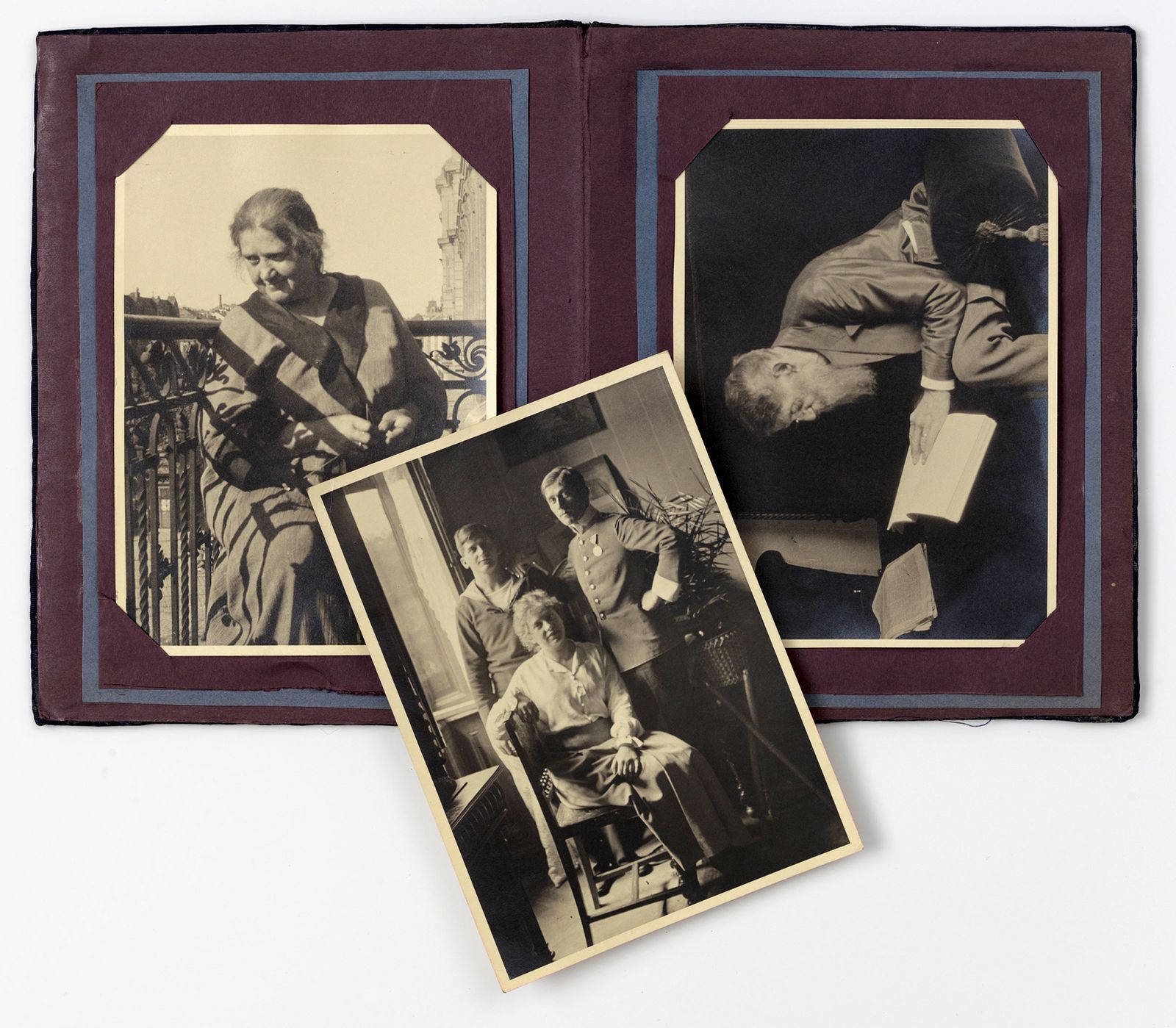 Anonymous, Album with three photos of Oskar Kokoschka's family𝂇, including a free photograph of Oskar Kokoschka in uniform with his brother Bohuslav and his sister Berta in the family home in Vienna, Vienna, Universität für angewandte Kunst, Oskar Kokoschka-Zentrum, OKV/Album10/FP, reproduction Birgit and Peter Kainz 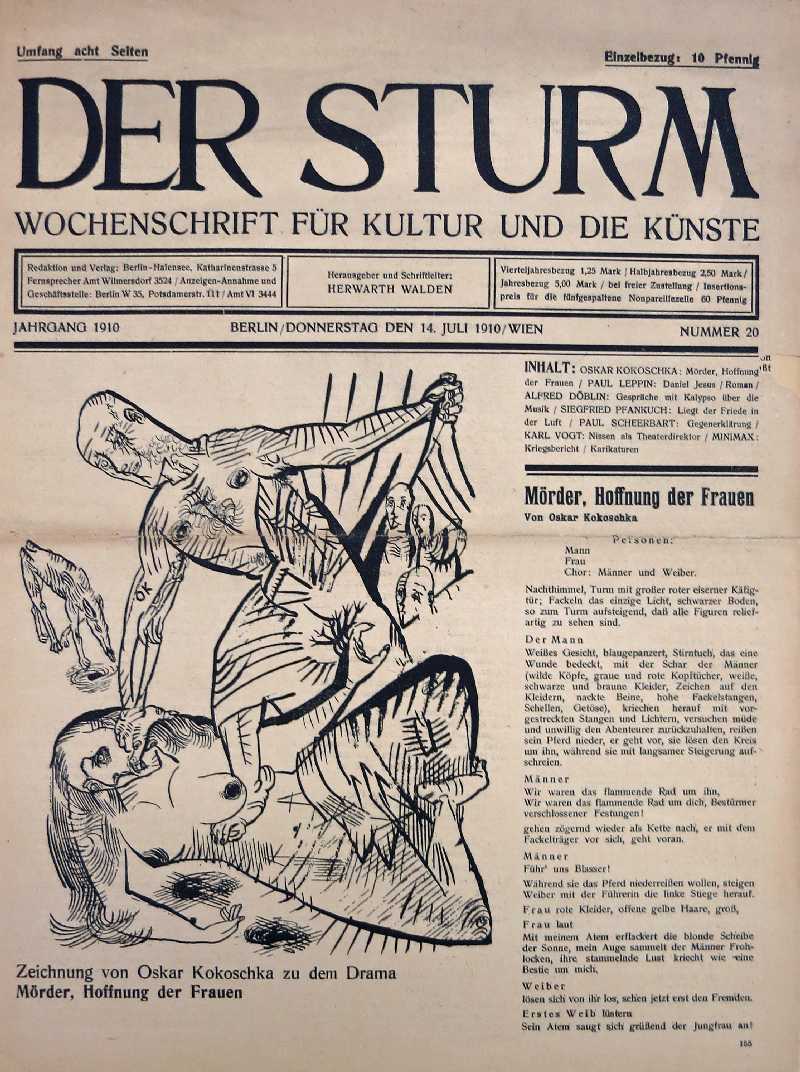 During the 1910s Kokoschka spends numerous periods abroad, starting with a trip to Switzerland to join his sponsor and patron, the architect Adolf Loos. Through Loos he obtains a number of commissions, notably for the Leysin sanatorium, where he paints portraits of aristocrats suffering from tuberculosis.

From there he travels to Berlin to assist Herwarth Walden, publisher of the weekly avant-garde journal Der Sturm. The journal publishes Kokoschka’s drama Mörder, Hoffnung der Frauen as well as numerous drawings by the artist. During this period, he illustrates a number of works: Tubutsch by Albert Ehrenstein (1911), Die chinesische Mauer (‘The Great Wall of China’) by Karl Kraus (1913), and also his own composition Der gefesselte Kolumbus (‘The Captive Columbus’, 1913). Kokoschka is now determined to break with conservatism, and in 1911 exhibits alongside Vienna’s Hagenbund. His training secures him a number of teaching positions, first in autumn 1911 in the school of Eugénie Schwarzwald and then, a year later, as a nude drawing assistant at the Kunstgewerbeschule in Vienna.

In 1912, Kokoschka begins a love affair with Alma Mahler. The following year they travel together to Italy, and he depicts her by his side in the famous canvas Die Windsbraut (‘The Bride of the Wind’). His final separation from Alma Mahler in 1915 prompts him to volunteer for the 15th Austrian Dragoon Regiment. Kokoschka is shot in the head and bayoneted in the chest whilst serving on the Ukrainian front, leaving him seriously injured. The following year a grenade explodes close by while he is serving on the front line at Isonzo.

Kokoschka spends his convalescence in Dresden, where he is stimulated by the vibrant cultural milieu. In 1919 he is appointed to a professorship at the city’s Academy of Art. During this time, he also oversees the fabrication of a life-size doll representing Alma Mahler. His plays Der brennende Dornbusch (‘The Burning Thorn-Bush’) and Hiob (‘Job’) are performed at the Deutsches Theater in Berlin. 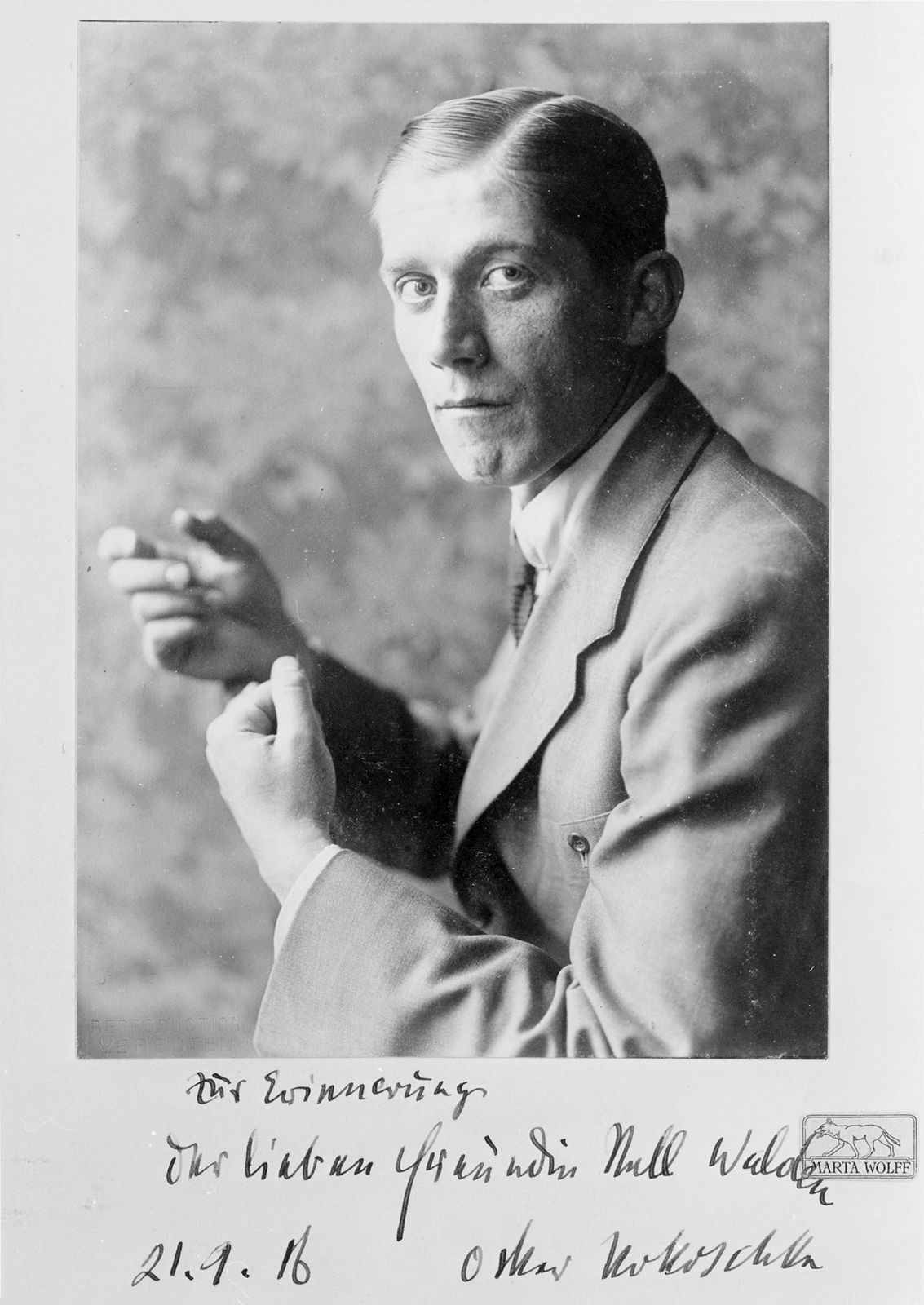 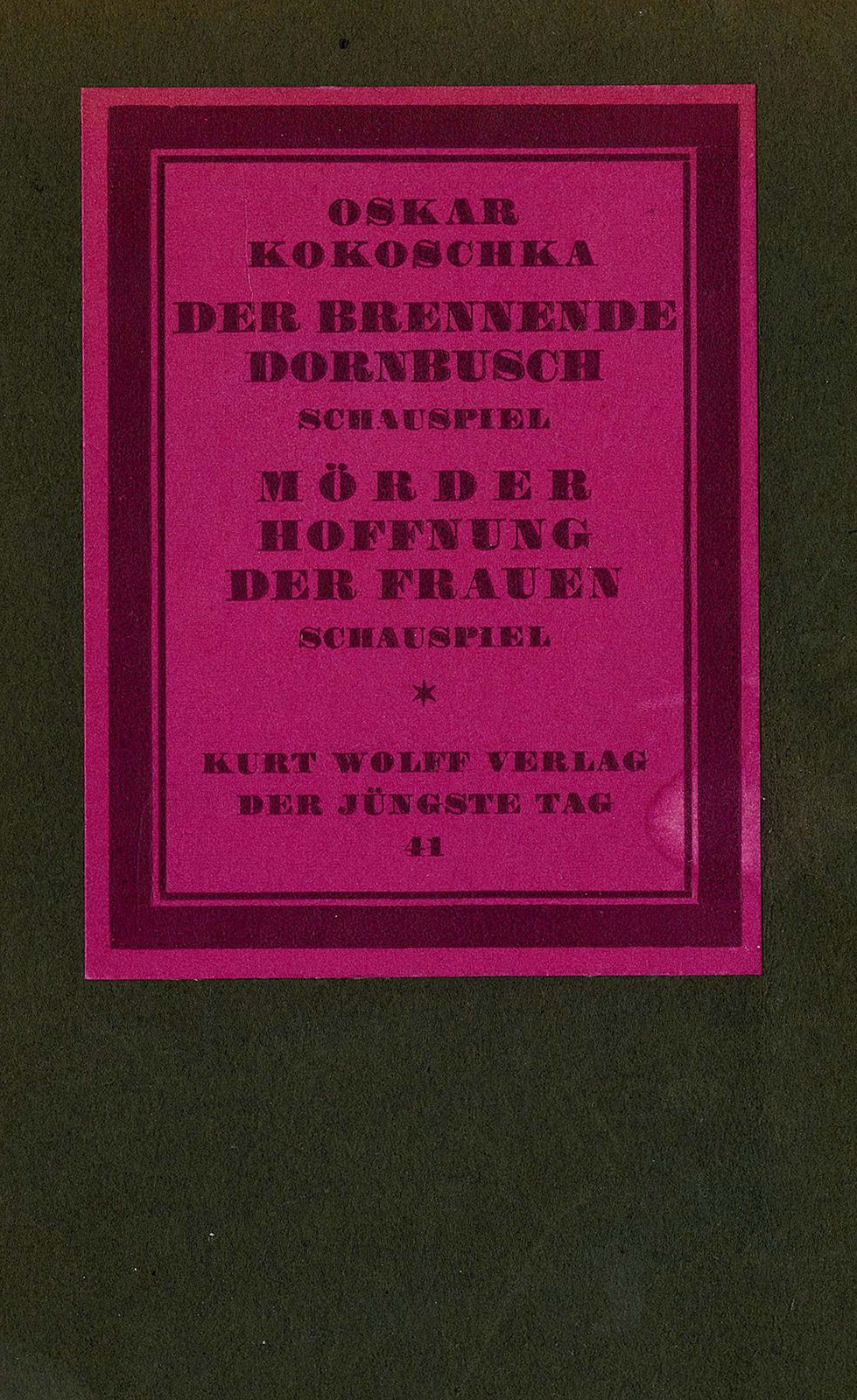 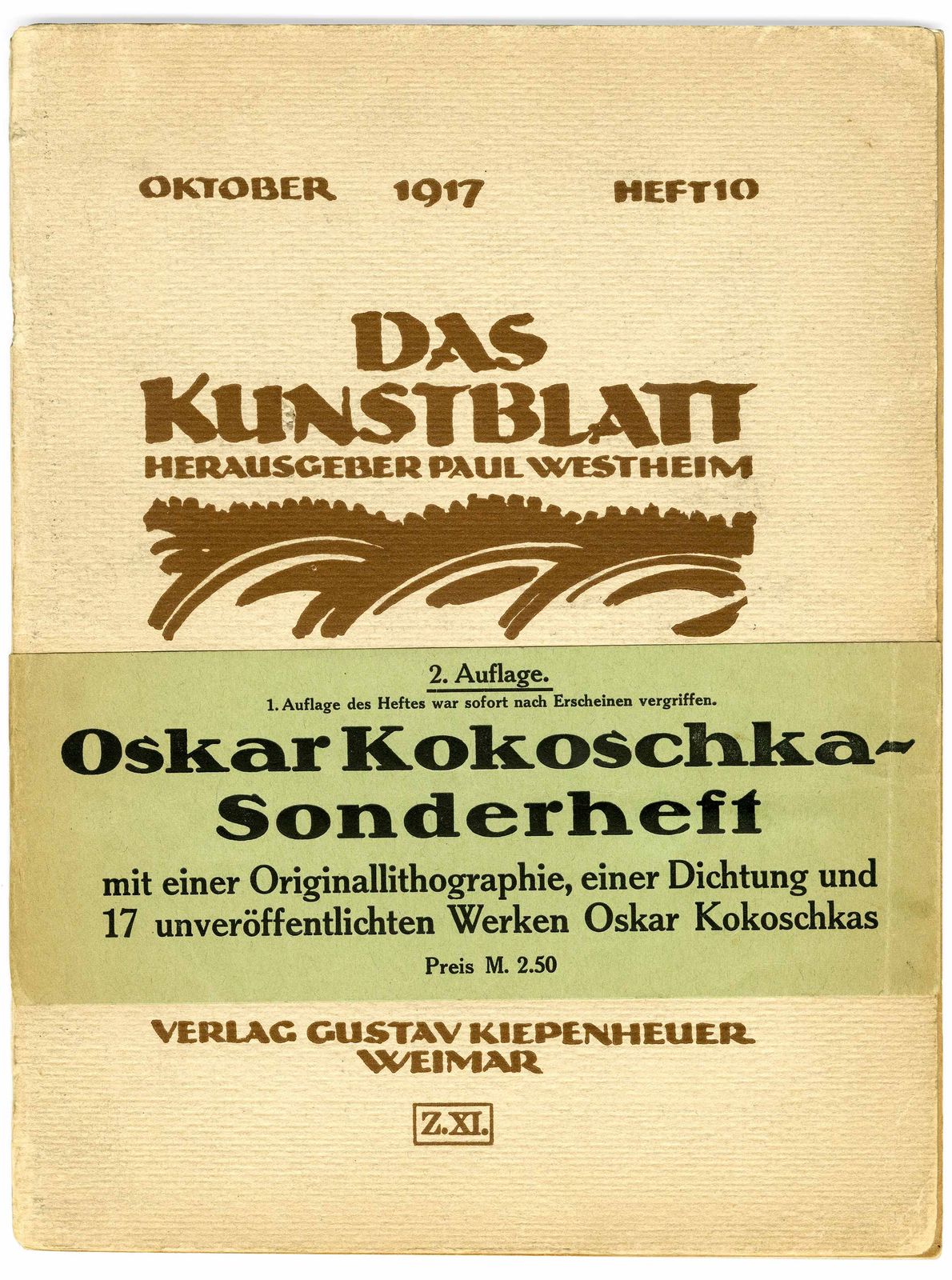 Having signed a contract with the art dealer Cassirer, who undertakes to purchase all his upcoming canvases, Kokoschka leaves Dresden and embarks on a nomadic lifestyle that takes him through Europe, Asia Minor and North Africa.

In 1934 he is in Prague, where he paints numerous views of the city and meets his future wife Oldriska-Aloisie, known as Olda. Through his friendship with the founding president of Czechoslovakia, Tomáš G. Masaryk, he acquires Czech citizenship. Eight of his works are shown at the ‘Degenerate Art’ exhibition in Munich in 1937. The following year he emigrates to the UK, spending the war years there and dividing his time between London, Cornwall and Scotland. He produces a large number of coloured crayon drawings as well as allegorical paintings of the political situation. 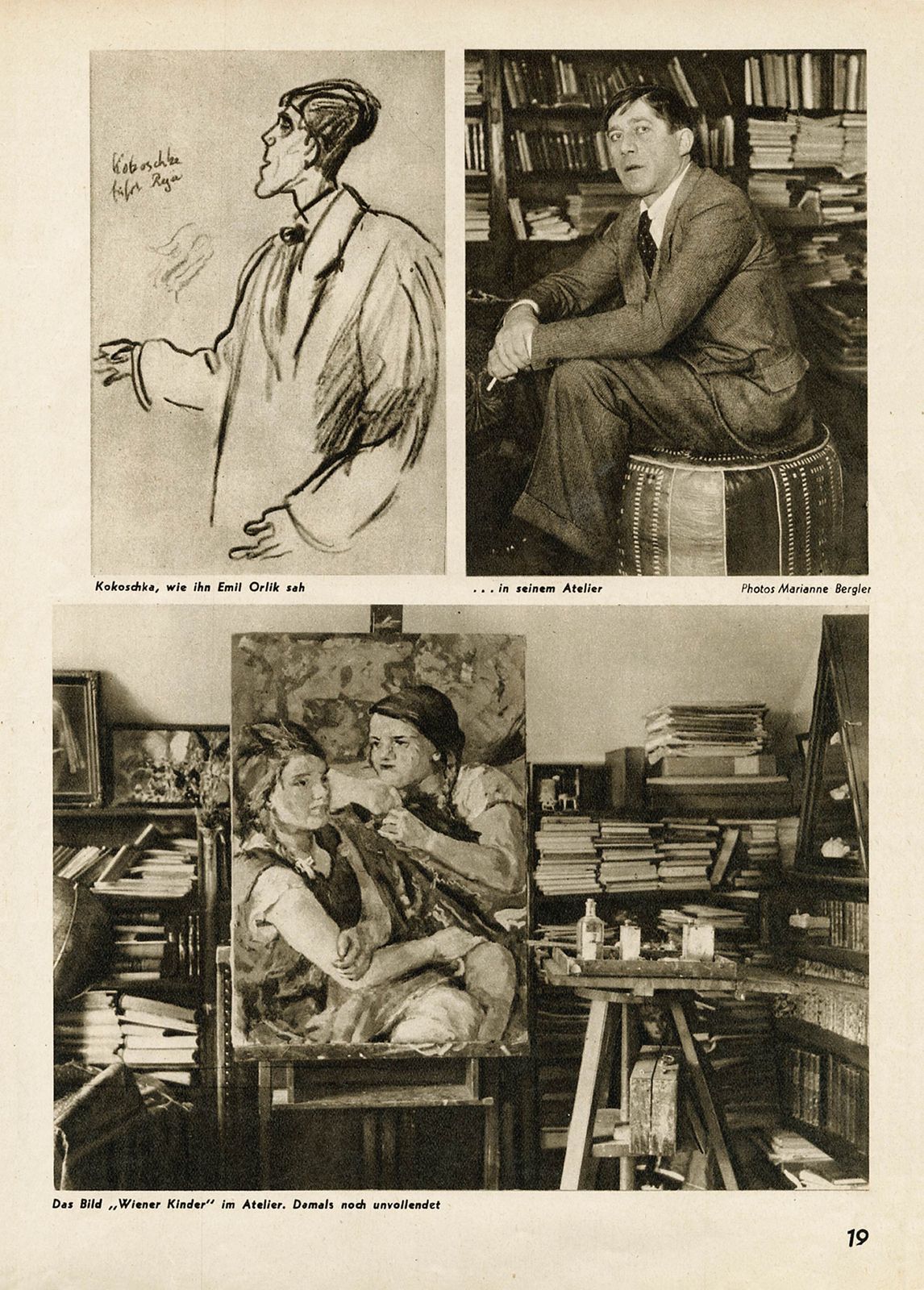 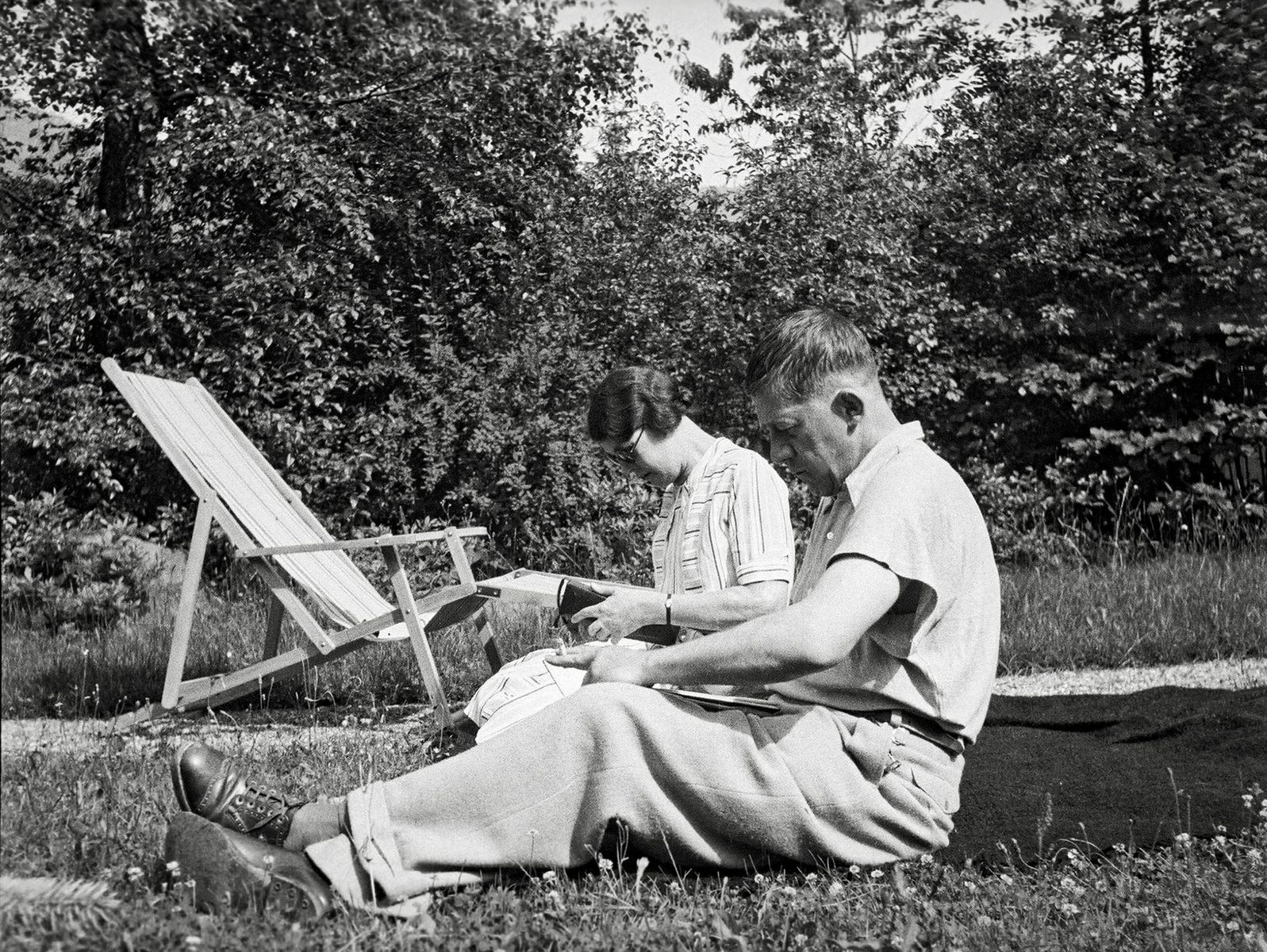 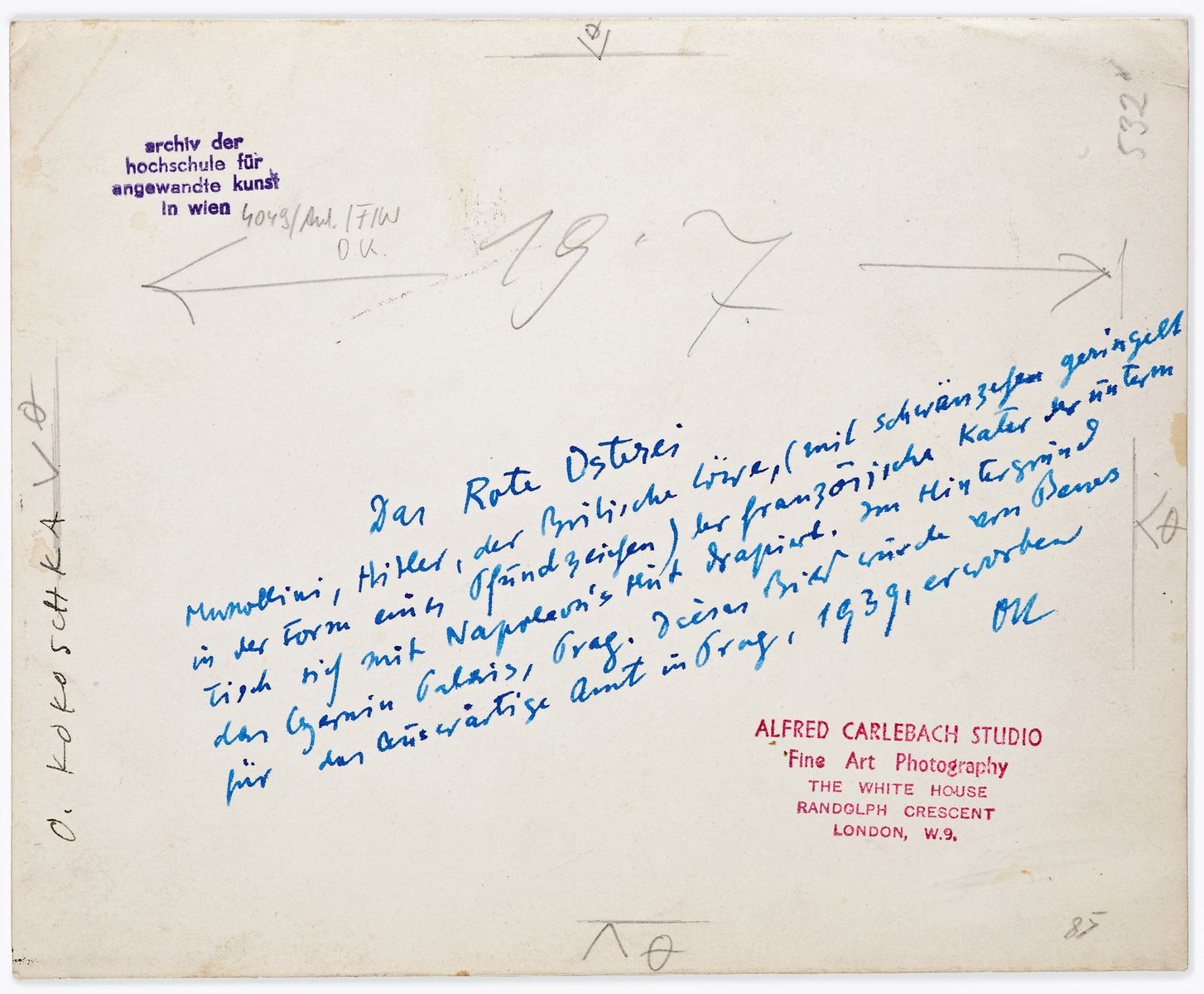 Kokoschka also executes two triptychs of monumental proportions: The Prometheus Triptych for the London house of Count Antoine Seilern (1950), and The Battle of Thermopylae for the University of Hamburg (1954).

1953 is a watershed year in more ways than one. Kokoschka inaugurates his International Summer Academy in Salzburg, which he also calls the School of Vision. He also moves into the Villa Dauphin in Villeneuve, where he will remain until his death in 1980.

During this period, Kokoschka is actively involved with the theatre, designing sets and costumes for Mozart’s Magic Flute (1955 and 1965), Shakespeare’s A Midsummer Night’s Dream (1956, not produced), Moisasurs Zauberfluch (‘The Magic Curse of Moisasur’, 1960) and Die gefesselte Phantasie (‘The Fettered Imagination’, 1962) by Ferdinand Raimund, his own work Orpheus und Eurydike (‘Orpheus and Eurydice’, 1960), and Un ballo in maschera (‘A Masked Ball’) by Giuseppe Verdi (1963).

In 1960 he receives the Erasmus Prize in Copenhagen and an honorary doctorate from the University of Oxford.

Olda Kokoschka, Directory of drawing notebooks𝂇, double-page on notebooks made in London in 1959 at the Victoria & Albert Museum and in 1949 in Rome at Villa Borghese, Vevey, Fondation Oskar Kokoschka 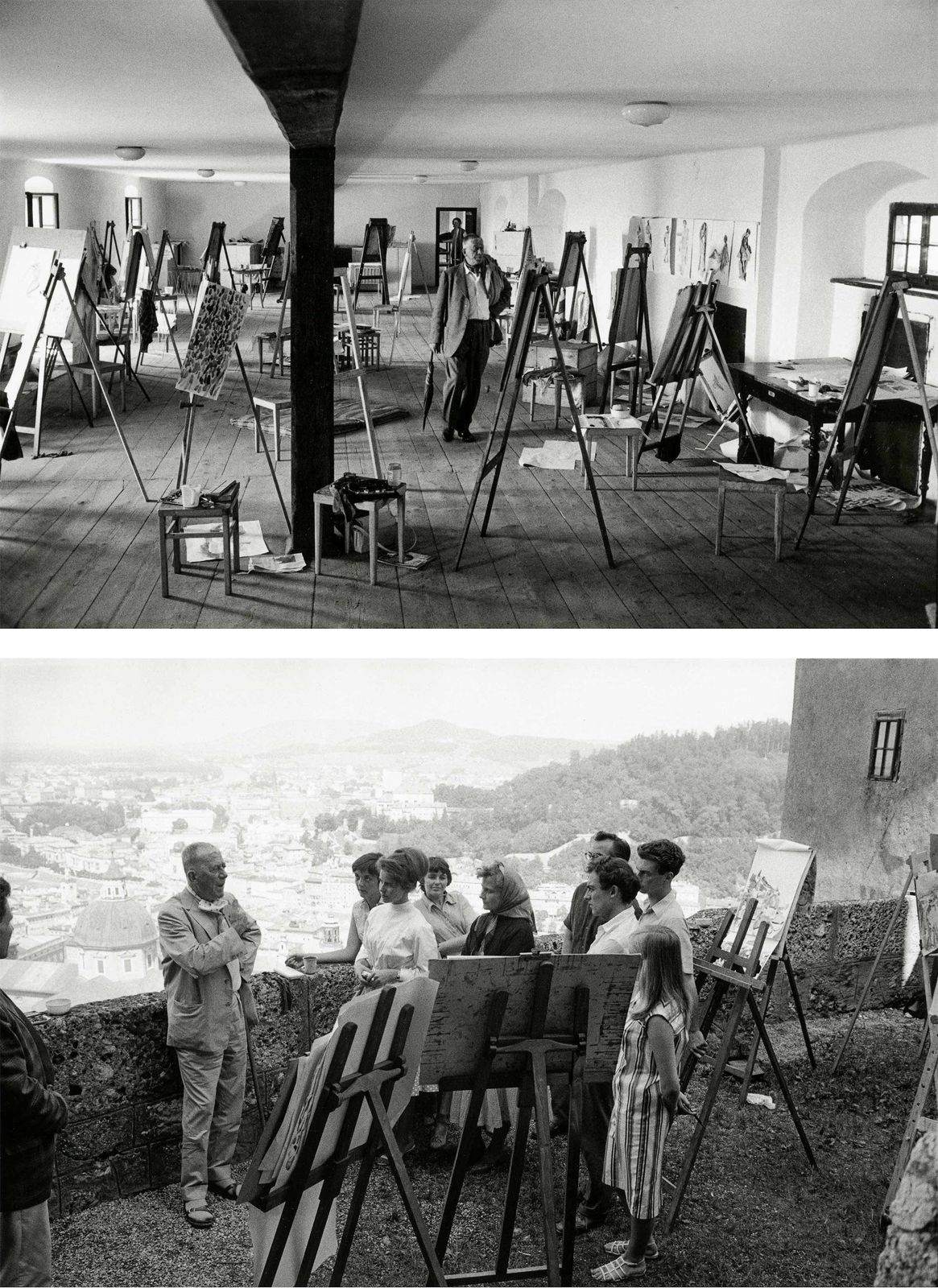 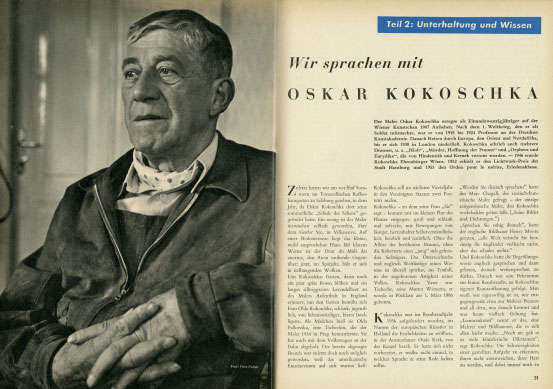 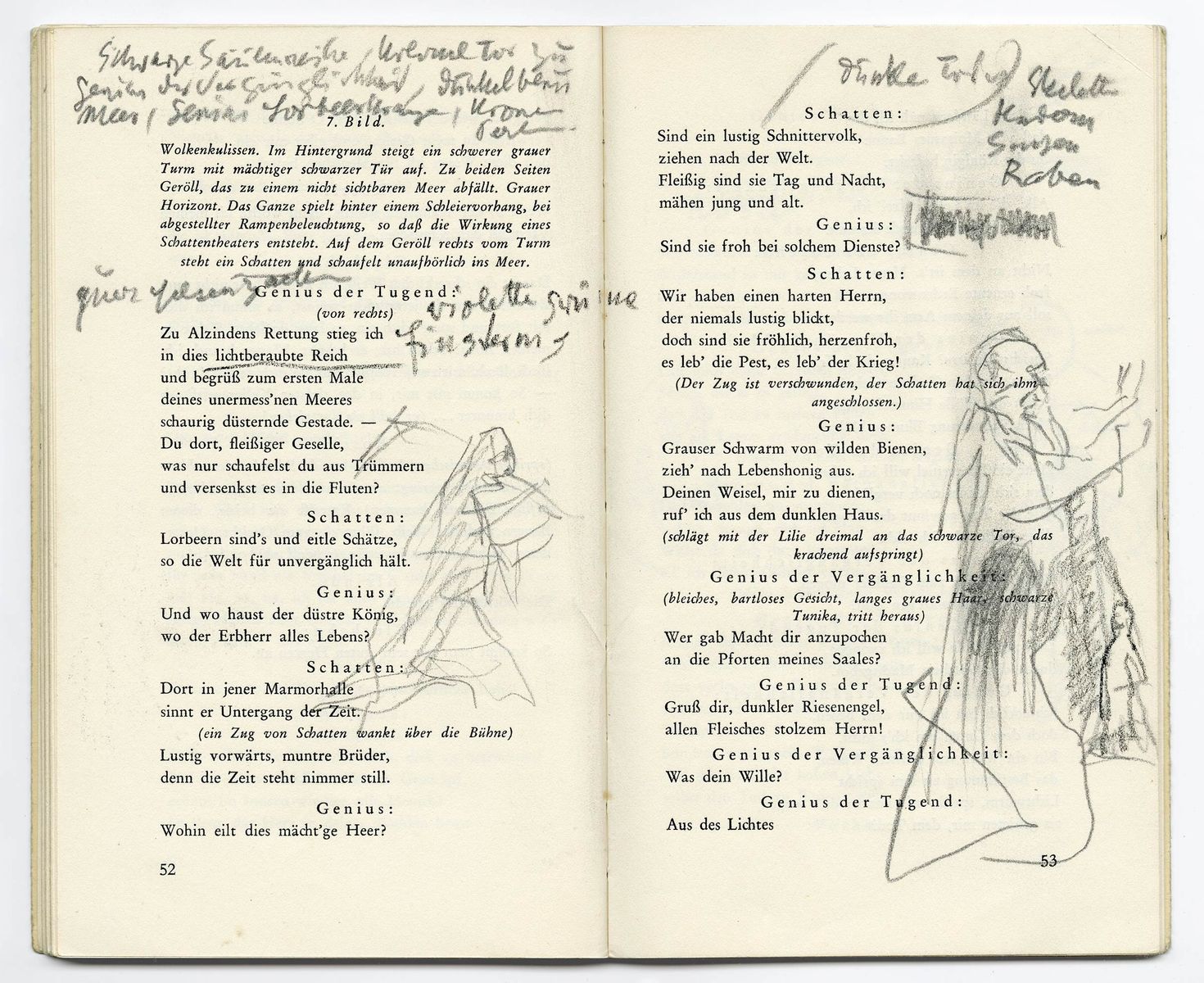 Throughout the 1960s and 1970s Kokoschka produces numerous albums of lithographs and etchings. Employing a large degree of narrative freedom, he also illustrates Shakespeare’s King Lear, Homer’s Odyssey, Aristophanes’ The Frogs, Penthesilea by Kleist, The Women of Troy by Euripides, Knut Hamsun’s Pan and Einstein überquert die Elbe bei Hamburg (‘Einstein Crosses the Elbe near Hamburg’) by Siegfried Lenz, revealing his many artistic influences of which Antiquity is the most important.

Kokoschka continues to travel widely, visiting Greece, Italy, Germany and the UK and also venturing to Tunisia, Libya, Turkey and Morocco as well as New York and Jerusalem, returning with several series of drawings which he subsequently transposes into lithographs. While working in these more manageable formats he nevertheless continues to accept prestigious painting commissions, such as a portrait of former German Chancellor Konrad Adenauer in 1966 and a cityscape of Berlin from the Springer tower.

During this period, Kokoschka also looks back at his life and achievements, publishing his autobiography in 1971. Four volumes of his writings are published from the year 1973, followed after his death by selected extracts from his correspondence.

In 1974 he is granted honorary Austrian citizenship. Kokoschka dies of a stroke on 22 February 1980 in Montreux hospital. 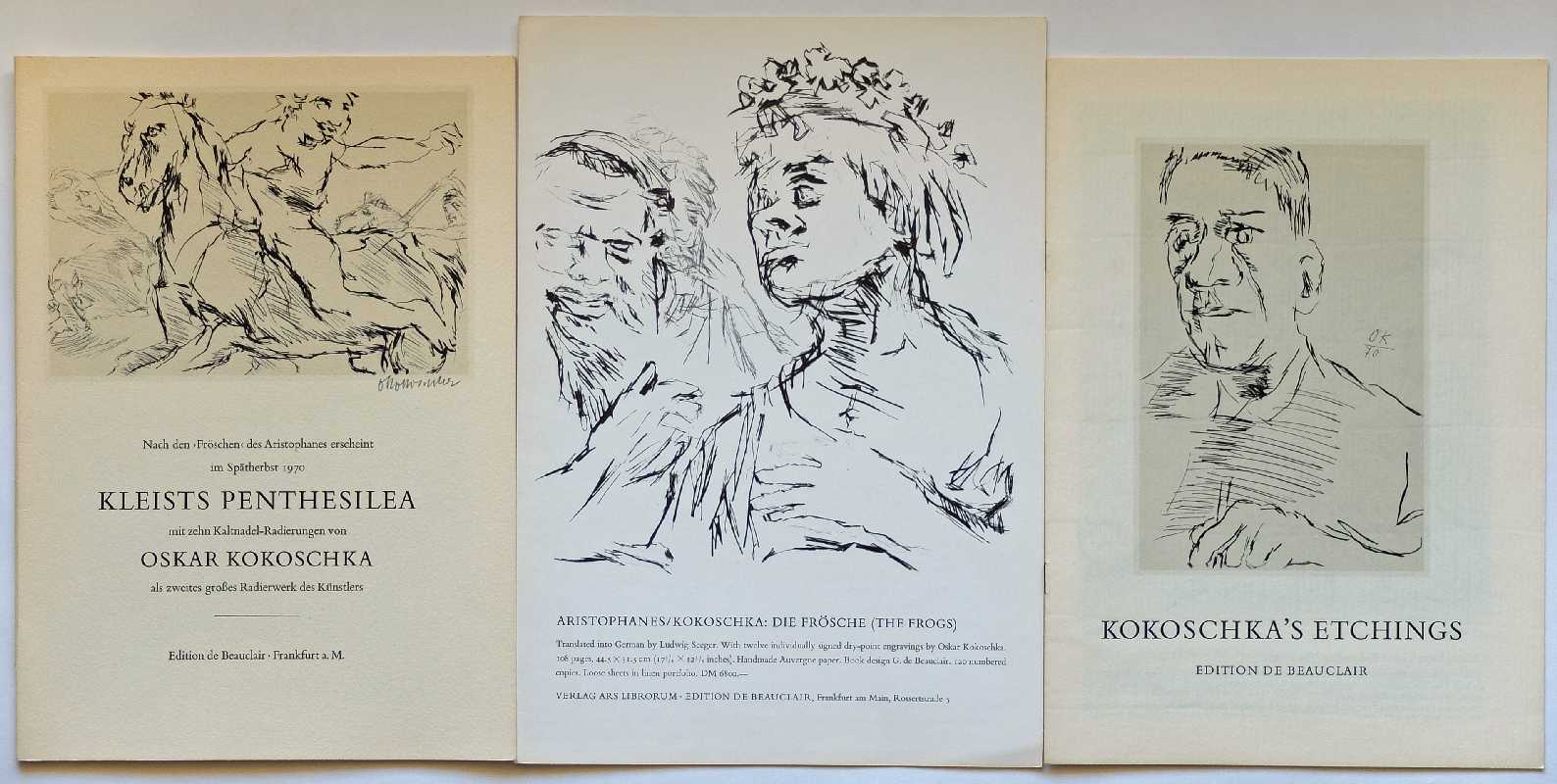 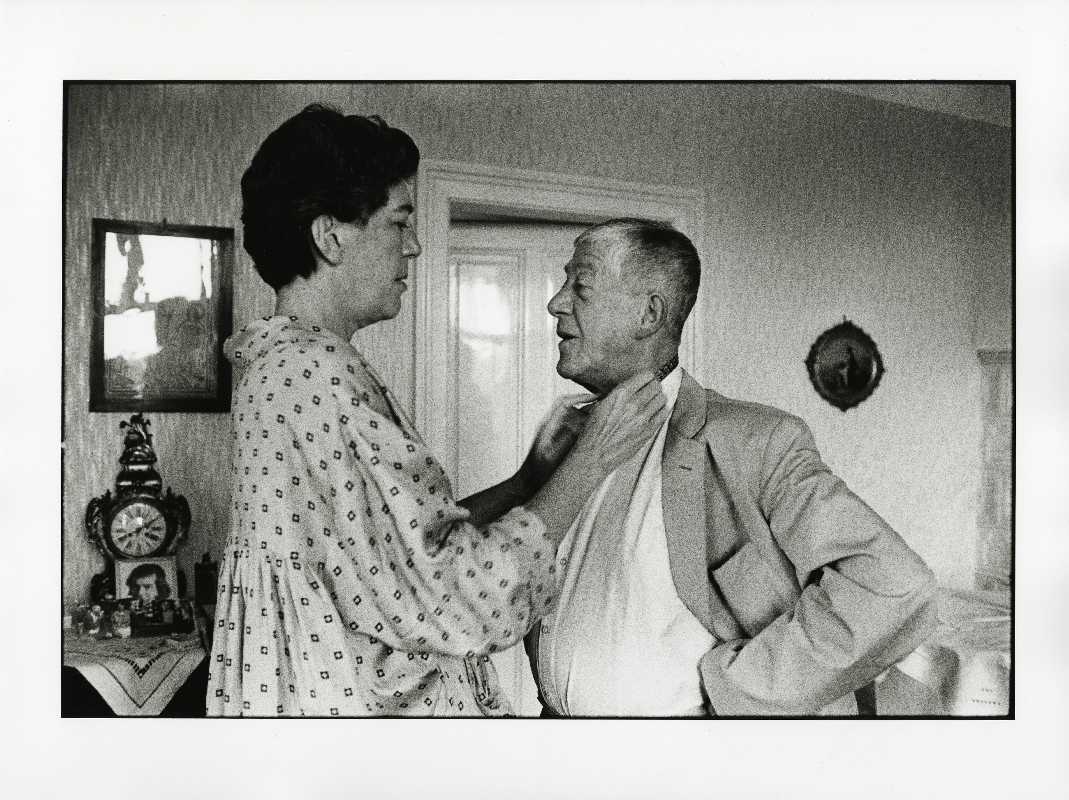 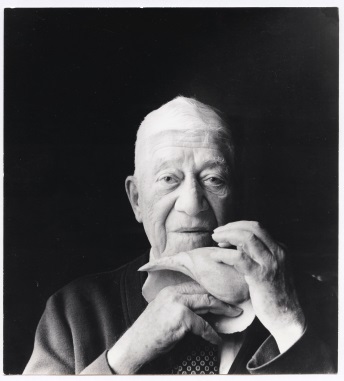 1981–2004
Olda Kokoschka and the creation of the Foundation

Olda Kokoschka, the artist’s widow, establishes the Fondation Oskar Kokoschka in 1988 and endows it with her own collection of her husband’s works. It continues to grow in the years that follow, thanks to donations and purchases. Housed at the Musée Jenisch, the Foundation has a wing of the museum permanently at its disposal for exhibition projects.

Olda also donates the literary estate to the Zentralbibliothek Zürich, and the biographical photographs and Kokoschka’s library to the Oskar Kokoschka-Zentrum in Vienna. His native town of Pöchlarn has also converted the house where he was born into a museum. 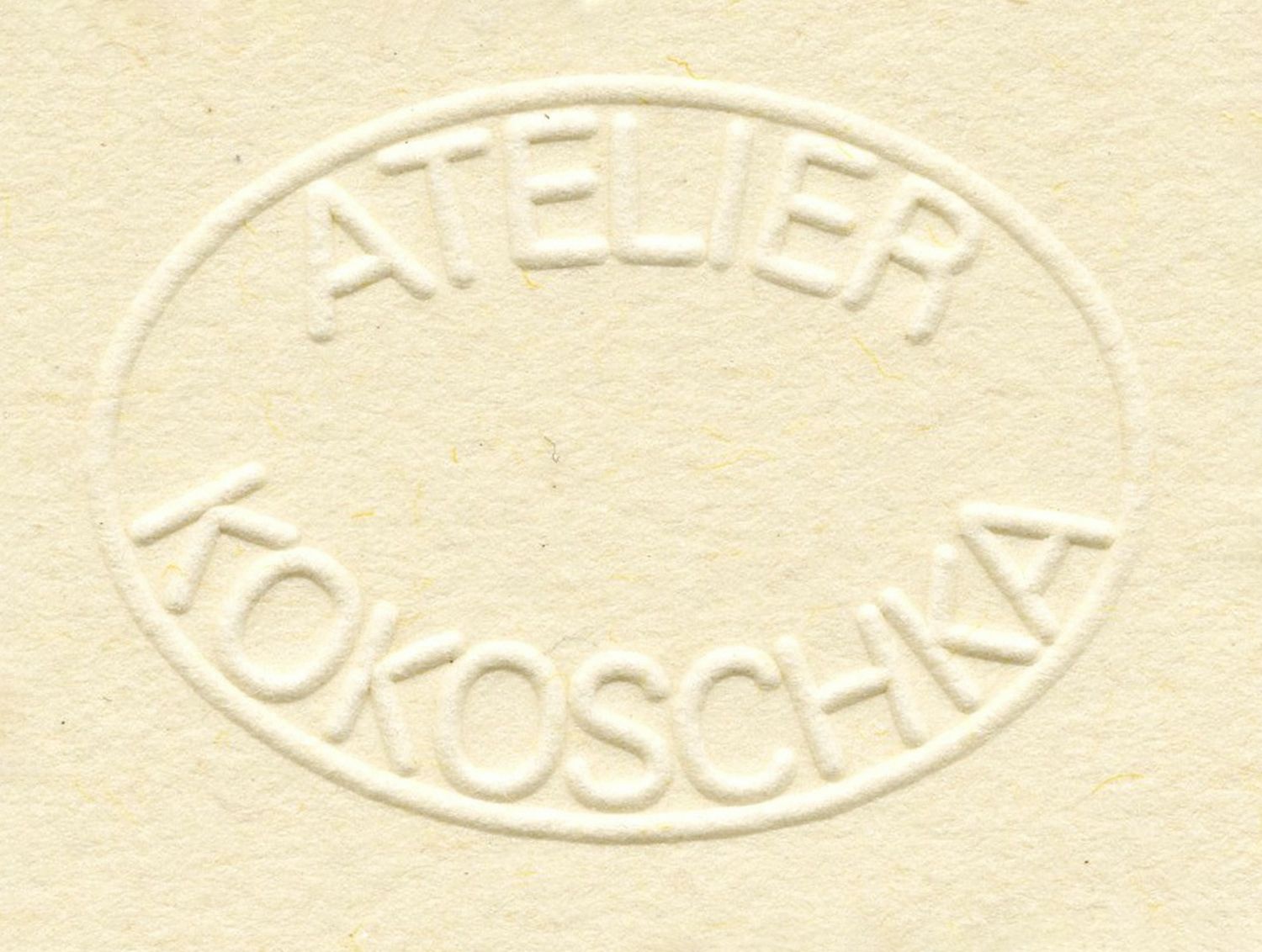